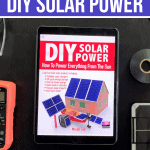 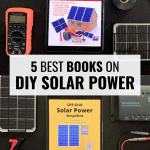 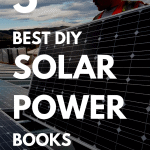 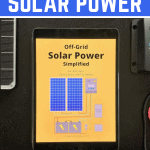 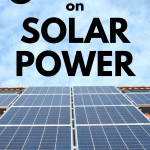 Just take a look at my Kindle library:

You could call it an obsession. 😅

Some of the books I read were MUCH better than others. Despite the online reviews, they aren’t all worthy of 4.5 stars.

Here are my favorites.

Multiple times while reading this book I started to buzz with excitement.

I’d close it and scribble down ideas for solar projects, my head swimming with possibilities.

That is Toll’s magic trick in DIY Solar Power. He takes a subject with no shortage of dry technical material and turns it into something exciting.

He has a knack for getting you eager to go out and set up your first solar panel system. At times it was even difficult for me to keep reading, which may be the best compliment I can give a DIY book.

I think that partly comes from how the book is organized. After covering the basics, Toll discusses how to design and build solar projects. He starts with small-scale ones and slowly adds complexity.

You realize that your options for DIY solar are nearly limitless. Your first project doesn’t have to be an off-grid setup. You can start with a portable solar charger, or even a solar-powered canoe.

If you’re a beginner — like I was at the time of reading — these small projects make DIY solar feel so much more accessible. It’s an encouraging feeling.

The book doesn’t cover everything you need to know. Toll often glosses over the finer details of a topic in favor of the high-level overview. This wouldn’t be my book of choice to reference for building a home energy system.

But if you’re a beginner looking to dip your toes into solar energy, this is the book I’d recommend.

My dad got interested in DIY solar power about the same time I did.

One day we were talking about it and he recommended this book to me. He liked it a lot, he said.

I was skeptical of the recommendation — my dad has a PhD in mechanical engineering and regularly reads technical tomes. But I decided to buy a copy anyways.

I didn’t enjoy it on my first read. The writing was too technical for my liking. It felt like engineer-speak. I questioned the use of the word “simplified” in the title.

But then something interesting happened.

I started building more of my own solar projects. During the builds, I’d frequently reference the solar books I’d read for a memory jog.

When I picked up this book a second time — after I’d gotten a little more experience in DIY solar — I got a lot more out of it. Sections that had initially confused me started to make sense.

Now that I’m more experienced, this book has become my favorite to reference.

As I build solar projects, I often return to it for reminders on things like how to calculate fuse sizes and where to place them in a solar power system.

I wouldn’t recommend this book to those looking to build their first small-scale project. That’s where I was when I first read it, and a lot of the material went right over my head.

Pick this one up once you’ve built a solar project or two. Or when you’re ready to undertake a more ambitious project, like grid-tied solar.

It’s the best solar power book for the intermediate to advanced. You’ll get a lot more out of it if you have a little experience under your belt.

I’m a big fan of Prowse’s YouTube channel. His videos are often among the best resources on any given solar topic.

So when I learned he had written a book on solar power, I was curious to give it a read.

If you like Prowse’s videos, you’ll probably like his book. He writes as he speaks — in a straightforward, no-nonsense style that a lot of his viewers appreciate, judging by the comments on his videos.

The book is meant for vehicle solar power systems, but most of it is applicable to any DIY solar project, mobile or not.

And the book lives up to its name. He does really try to make solar power easy to understand by taking out a lot of the guesswork.

Rather than going too in-depth on how to pick the right parts for your system — which size wire, for instance — he often just tells you what to get.

My first read through, as a complete beginner, I greatly appreciated this. I liked being told what to use. I didn’t want to bother figuring it out myself. In that way it’s a very beginner-friendly read.

The downside to this approach, of course, is that it doesn’t teach you that well how how to design and build a system yourself.

Once I’d built a few solar projects, I wanted to know the why behind all the rules of thumb and recommendations.

And while this book does discuss some of these things, it’s usually not as comprehensive as other solar books out there.

RV and Vanlife folks should give this one a read. It’s also helpful for beginners — regardless of whether or not you live in a mobile home. The more experienced I got, though, the less I got out of it.

After finishing many of the top solar power books on Amazon, I got bored of reading about the same stuff over and over again.

By that time, I’d also started designing and making my own solar projects. That’s when I realized batteries, especially lithium batteries, are by far the most expensive part of a solar power system.

Like Toll’s other book on this list, DIY Lithium Batteries is easy to read and understand given the complexity of the topic.

He makes building your own batteries seem fun and accessible (and perhaps slightly dangerous). He also shares some lithium battery projects to get you started.

This isn’t a solar power book per se, but it’s a great complementary read once you’ve started building your first solar projects.

You’ll be spending lots of money on batteries, so learning how to make your own — at least for smaller projects — is a fun and worthwhile investment.

This book felt a bit outdated — there are exactly ZERO mentions of lithium batteries in the entire book, for instance — but it’s a decent option for beginners.

Eccleston spends a lot of time talking about the literal nuts and bolts of solar power — wires, connectors, busbars, and so on. It’s a bit of a strange area to focus on, but it does fill a gap left by other books.

This was the first book I read about solar power, and I came away from it with a better understanding of wire gauge than major components like inverters and charge controllers.

I haven’t made up my mind yet as to whether or not that’s a good thing.

Once you’ve learned a bit about solar power, here are some beginner-friendly projects to get you started:

After reading five of the best books on solar power, I recommend DIY Solar Power to beginners looking to build small-scale projects and Off-Grid Solar Power Simplified to those with a little experience who are taking on a more ambitious project.

Read the one that suits you. Then pick a project and just get started.

You’ll make mistakes, and that’s completely normal. View them as part of the learning process.

After all, the not-so-secret truth about the DIY world is you learn more by doing than reading.