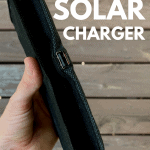 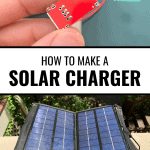 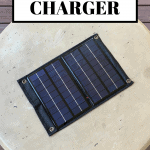 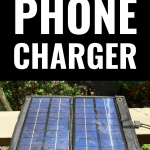 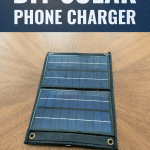 I recently made a DIY solar USB charger that, in my opinion, is WAY better than most of the other designs out there.

It’s portable. It looks good. And it can charge your phone and USB devices faster than the mere trickle put out by most other homemade solar chargers.

It’s affordable and easy to make.

Here’s how to do it.

For this design, I upcycled an old reusable grocery bag to cut a strip of fabric to which I attached the panels. It protects them and allows them to fold up for easy storage.

Place the panels, eyelets (if using), and DC/DC buck converter on the reusable grocery bag in your desired layout.

Tip: I recommend giving yourself 1″ or more of space between your solar panels so they can fold easily. I also gave myself more length than necessary so I could fold the fabric over the buck converter, as you’ll see in Step 6.

Cut the fabric to your desired dimensions with scissors. (Mine ended up being about 14″ long by 8.25″ wide.)

Cut a length of wire to connect the panels’ positive terminals. Give yourself some slack in the wire so it isn’t pulled taut when the panels are folded.

Note: Because my panels have two pairs of terminals on back, before wiring I used a multimeter to check their voltages. It turned out the terminals that output 9 volts are the two “top” terminals — not the terminals with the “+” and “-” signs. Strange.

Tip: Keep your solder joints as flush as possible with your solar panels. This helps later on when gluing them to the fabric.

Cut a length of wire to connect the panels’ negative terminals. Once again, give yourself some slack.

Step 3: Solder the Leads to the Panels

Strip and solder the positive lead to one of the panels’ positive terminal.

Cut a length of wire for the panels’ negative lead.

Strip and solder the negative lead to one of the panels’ negative terminal.

What outputs should we expect?

Well, here are the specs for the panels I used:

Wiring solar panels in parallel adds the current (amps) together while keeping the voltage (volts) the same.

Thus, for volts, you should see a number around 9V DC.

For amps, you should see a number around 666mA (333mA * 2). But in real world conditions, expect solar panels to output a little less than their stated current.

Tip: You’ll likely have to switch the red probe to your multimeter’s other port in order to measure this amount of current.

Step 4: Solder the Buck Converter to the Leads

Locate the positive and negative terminals on the buck converter.

Now you should have a working solar charger!

Time to check that it’s working.

First, make sure the buck converter is connected properly and working by shining some light on the panels. Its LED should light up.

Next, test your charger by placing it outside in direct sunlight and plugging in your phone or USB device. Your device should start charging.

My Kindle’s charging light turns on when I plug it in — my charger is working!

I tested my charger’s output with a USB meter to confirm that the charger was indeed outputting a decent current at 5V.

According to our solar charging calculator, it will take about 10.8 hours of direct sunlight to fully charge my iPhone XR.

Definitely not the fastest solar charger, but it’ll top off my battery in a pinch.

Optional: Shrink wrap the buck converter using heat shrink tubing and a heat gun. I did this to for aesthetics and to protect the circuit board a bit. It covers up the converter’s LED, but that wasn’t a big deal to me.

Step 5: Glue the Charger to the Fabric

Grab your glue and the strip of fabric you cut back in Step 1. Glue the panels and buck converter to the fabric in your desired layout.

Tip: The glue I used bled through the fabric a bit, so you may want to put a piece of newspaper down first.

Wait for the glue to set. Once it has, touch up any spots you missed, if needed.

Because I’ll be using my charger while hiking and biking, I wanted to install eyelets so I can strap it to my backpack and bike. If you don’t need to attach your charger to anything, you can skip this step.

First, let’s install the two eyelets at the “bottom” — the side opposite the buck converter.

Cut a circle in the fabric using the eyelet as a guide. Feed the eyelet bottom through the hole.

Tip: Since I used such small eyelets I just cut a small X with my scissors. You could also create a hole by poking a nail through.

Repeat these steps to install the second bottom eyelet.

Now it’s time for the top eyelets — the ones on the same side as the buck converter.

To protect the converter, I decided to fold the extra fabric over it and cut a hole for its USB port. (If you don’t want to do that, just install the top eyelets like you did the bottom ones.)

Then I installed the top eyelets through both layers of fabric, glued the flaps together, and glued the USB port to the fabric.

Note: Don’t cover up any of the solar panel!

Wait for the glue to set, and you’re DONE!

Now that you’ve made your own solar-powered charger, it’s time to charge something with it!

Place it outside in direct sunlight. Plug in your phone or other USB device. Then sit back and relax as you take advantage of all that free solar energy.

Learn how to solar charge your ebike battery for what may be the most eco-friendly transportation method there is. I even show you how I mounted my solar charger to my ebike to make a full-on solar bike.