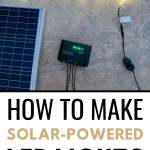 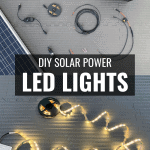 In this guide, I’ll show you how to make DIY solar powered LED lights in JUST 5 steps.

Soon you’ll have your own homemade solar powered LEDs that look something like this:

And you’ll be able to put them wherever you want — in your shed, van, RV…you name it.

Note: I’ve listed and linked to the materials I used in my setup. Feel free to copy this list as-is or adjust the sizes of the various components for your energy needs.

Step 1: Identify the Positive & Negative Wires on the LED Lights

I’m going to connect my 12 volt LED lights directly to my 12 volt battery. So I need to identify the lights’ positive and negative wires.

Inspect the wires connected to the LED lights’ wall adapter. We’re going to cut this adapter off. So — and this is important — make sure that you’ll be able to match up both wires on the adapter’s end with their counterparts on the LED strip’s end.

You may have to mark them, such as with a pencil. Or, if they’re like mine, they may have writing on only one wire and not the other.

Basically, make sure you can keep track of which wire was connected to which after you cut them. You’ll see why this is important later on.

Cut the LED lights’ wall adapter off, split the wires apart, and strip all the ends about 1/4″.

Now we need to find which of the wall adapter’s wires is positive and which is negative.

Set your multimeter to the DC voltage setting. (The wall adapter converts the 120V AC coming from an outlet to 12V DC to power the LED strip lights.)

If the voltage is negative, the probes are reversed. Just reverse ’em like I did in the video above.

…and we need to do the same for the wires connected to the LED lights.

Remember what I said about keeping track of which wire was connected to which?

The positive wires in my kit had writing on them, while my negative wires had long minus symbols along their coating. (Wonder what that could mean…) So that’s how I was able to match up negatives and positives. If you marked your wires somehow, just match them up that way.

I shrink wrapped some red heat shrink tubing on the positive LED wire to make it easier to identify moving forward. *Highly* recommended.

Step 2: Crimp the Ring Terminals to the LED Wires

Crimp the 1/4″ ring terminals (or connectors for whatever terminals your 12 volt battery has) to the positive and negative LED wires.

You can check the lights by connecting them to your 12 volt battery and turning them on. They should light up.

The LED lights are good to go. 👍

Step 3: Connect the Charge Controller & LED Lights to the Battery

Connect the battery tray cables to the solar charge controller by inserting the positive and negative cables into their respective terminals and screwing the terminals shut.

Note: It’s recommended you add a fuse on the positive battery cable. The easiest way to do this is to buy an ANL fuse set and some fuse cables. Or you can DIY it by adding an inline fuse holder like I did. (Not sure how to add one? Check out my full instructions on connecting a battery to a charge controller.)

Your charge controller should light up to indicate that it’s properly connected to the battery. Your LED strip lights should also light up when you flip the switch on.

Now just one more thing to connect and your homemade solar power LED lights will be complete.

I wonder what it could be…

Step 4: Connect the Solar Panel to the Charge Controller

..the solar panel, of course.

Your charge controller should light up to indicate that the solar panel is properly connected.

Now, you’ve effectively connected the solar panel to the battery. Put the panel in the sun and it will start charging the battery.

The solar panel charges the battery, and the battery powers your LED strip lights!

Tip: Find out how long it’ll take for your solar panel to charge your battery with our solar battery charging calculator.

Your solar LED lights are all set up. Now to test them out and see if they work.

Unravel your lights, turn them on, and watch them glow!

Peel the adhesive cover off the back of the lights and stick them in your shed, van, RV, garage, or wherever your heart desires…

Now you know how to make solar powered LED lights.

Congrats — that’s no small feat. You essentially built a small solar power system to power them.

I’ve got even more DIY solar light projects for you.

Like I said, you can add these solar power LED lights to your shed! I do just that in this tutorial.

This solar lighting circuit is similar to the solar powered LED lights you just made. And it’s well-suited for indoor and outdoor use.

This solar mason jar lantern makes a great outdoor solar light. It’s a “set it and forget it” type of solar light. You just turn it on, put it outside, and it does all the work — charging during the day and turning on at night. And it takes a mere 15 minutes to make.