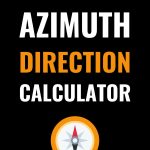 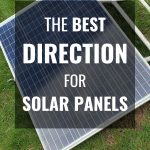 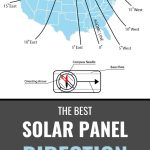 Here is a list of the best solar panel directions for 50 of the most populated zip codes in the United States.

Note: The solar panel direction for each zip code above was calculated in 2022 using our solar panel orientation calculator. Magnetic declination at a location changes over time, so we will update this list yearly with the latest azimuth angles and declination values.

If you don’t see your zip code on this list, just enter it into the calculator at the top of this page to find the best direction for your location.

Here is a magnetic declination map of the United States.

And here is a magnetic declination map of the entire globe.

Note: Both of these maps were produced for 2020 by the National Oceanic and Atmospheric Administration (NOAA). Magnetic declination values for the current year will be slightly different.

How to Use These Maps

Let’s say you live in Los Angeles, California. Here’s how you’d use a magnetic declination map to find which direction to face your solar panels.

1. Locate the closest line to your location. I marked the spot where Los Angeles is on the map. Turns out there’s a line just north of it. (The lines on the maps are called isogonic lines, which are lines along the earth’s surface where magnetic declination values are constant.)

What Is the Best Direction for Solar Panels to Face?

For locations in the northern hemisphere, the best solar panel direction is true south.

For locations in the southern hemisphere, the best solar panel direction is true north.

These values typically maximize electricity production over the year. However, local weather patterns may cause the optimal azimuth angle to be slightly east or west of these default values.

What Is a Solar Panel’s Azimuth Angle?

The azimuth angle is the direction that a solar panel faces. It is often expressed in degrees clockwise from north.

Many solar calculators — such as PVWatts — use true north in their solar energy calculations without making it very clear.

What Is Magnetic Declination?

True north is different than magnetic north. The difference between the two is called magnetic declination.

Compasses point toward magnetic north. So, if you’re orienting a solar panel using a compass, you need to adjust its direction by the current magnetic declination at your location.

Our solar panel azimuth calculator calculates the current magnetic declination for your location using the latest version of the World Magnetic Model — the same model used by the US Department of Defense, the UK Ministry of Defence, and NATO.

The earth’s magnetic field varies over time. Accordingly, the magnetic declination at a given location also changes over time. Our calculator uses the current date to calculate your solar panel azimuth angle.

This also means magnetic declination maps are only accurate for a certain time period. If you use one, make sure it isn’t too old, otherwise the values will be slightly incorrect.

No. Local weather patterns may cause the best azimuth angle for your solar panels to be slightly east or west of true south or true north.

For instance, let’s say you live in the northern hemisphere. Typically, your optimal azimuth angle would be true south.

However, let’s say that when it rains at your location, it’s usually in the late afternoon. In this case, your optimal azimuth angle may be slightly east of south to optimize for clear skies in the morning and early afternoon.

Our calculator takes into account your location’s magnetic declination to give the default optimal azimuth angles of true south and true north. But you can fine tune these even more by using PVWatts, which I describe how to do in the next section.

Another important exception to the “true north or true south” rule is if you want to maximize solar production of a grid-tied system during peak time-of-use (TOU) rates. Peak TOU rates tend to be in the afternoon, when the sun is slightly west in the sky.

In these scenarios, your solar panels will save you the most money if you orient your panels slightly west to maximize energy production when electricity is most expensive.

Besides our solar panel direction calculator, here are 3 more free tools you can use to find which way to face your solar panels.

A standard compass shows magnetic north, but there are plenty of compass apps that can show true north.

I have an iPhone, so here’s a quick video showing you how to find true north using the iPhone’s default Compass app. (For Android users, you can download a compass app that shows true north.)

2. Go to Location then select “While Using the App.” The app needs to know your location to calculate true north.

3. Go back to Compass settings then select “Use True North.”

4. Open the Compass app to see your true orientation. Now your compass app shows true north rather than magnetic north.

NOAA has a free magnetic declination calculator you can use to find true north. Here’s how:

2. Enter your location in the Location field and click “Get & Add Lat / Lon”. This adds your location’s latitude and longitude to the calculator. Alternatively, if you already know your coordinates, you can just type them into the Latitude and Longitude fields (in degrees, minutes, seconds).

4. Find your location’s magnetic declination in the results window. Your results are given in degrees, minutes, seconds which you can convert to a decimal.

Using the National Renewable Energy Laboratory’s PVWatts Calculator, you can find your optimal azimuth angle that takes into account historical weather data. Here’s how to do it.

2. Enter your city or address in the search bar then click “Go”.

3. On the Solar Resource Data page, scroll down to the map and confirm that the calculator selected the right location. If it did, click “Go to system info.” If it didn’t, click “Change Location” at the top of the page and try again.

4. On the System Info page, experiment with different azimuth angles (in degrees clockwise from true north) until you find the value that generates the most electricity. Start by typing in a number, then click “Go to PVWatts results”. I entered “180” as my first azimuth angle.

5. Record the estimated system output. At an azimuth angle of 180° clockwise from true north, a solar power system at my location (with the default inputs) would generate an estimated 6,415 kWh per year.

6. Go back to the System Info page and adjust the azimuth angle up and down in increments of 1 until you find the angle(s) that generates the most solar energy at your location. After trying many different numbers, I found that 175-179° clockwise from true north are my optimal azimuth angles — any of them would generate an estimated 6,416 kWh per year.

7. Orient your panels toward your optimal azimuth angle using a true north compass app or magnetic declination calculator. To do so, find true north using one of the two methods described above and then adjust clockwise from true north by your azimuth angle.

As you can see from this example, the extra energy gleaned from this method can be minimal.