Will a 5W Solar Panel Charge a 12V Battery? 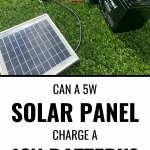 Yes, a 5W solar panel can charge a 12V battery.

In fact, I recently did it myself:

Then, after doing it, I saw that Google isn’t exactly giving the best answer to this question:

And I decided to write this article to set the record straight.

So, once again, for the people in the back:

Yes, you can charge a 12V battery with a 5W solar panel. You just need to make sure it’s a 12V solar panel. Anything less — such as a 6V or 9V solar panel — likely won’t work.

Here’s how I did it:

Step 1: Connect the 12V Battery to the Solar Charge Controller

Connecting a battery to a solar charge controller requires wires, wire connectors, and an inline fuse.

You can use your own wire and connectors, or you can buy some to make the process a little easier. I ended up buying something called the NOCO GC018. It’s a 12V plug adapter that comes with an inline fuse and ring terminals — the right kind for my 12V battery.

Then I just pulled the wires apart a little bit and stripped the ends. (I’ll be sticking the stripped ends in the charge controller’s terminals.)

So that’s what I did:

I first connected the positive and negative wires to their respective battery terminals. Like so:

Then I used a screwdriver (a precision screwdriver, in my case) to connect the stripped wire ends to the charge controller’s battery terminals. My controller’s terminals have a battery icon on them, as well as a plus and minus, to help me know where each wire goes.

When all the wires were connected, my charge controller turned on to indicate that it was properly connected to the 12V battery.

Consult your charge controller’s manual for instructions on how to program it for your battery type. Mine defaults to sealed lead acid batteries, which is the battery type I was using.

My 5W solar panel came with wires that had stripped ends. This made it simple to connect it to my charge controller.

Now your solar panel is connected…

Here’s how mine turned out:

That’s really all there is to it.

However, because my solar panel was inside, at this point it wasn’t getting enough sunlight to actually charge the battery.

Time to take it outside.

To test mine, I took everything outside (making sure no wires got disconnected in the process) and put the solar panel in direct sunlight.

I then cycled through the system specs on my charge controller until I got to the PV current display.

It indicated that my 5W solar panel was charging my 12V battery at a rate of 0.2 amps:

There you go — proof that a 5W solar panel can charge a 12V battery.

I can now just leave my charging setup outside in direct sunlight. The panel will continue to charge the battery as I go about my day.

The charge controller has overcharge protection, meaning it will stop the charging once the battery is full.

Here’s the circuit diagram for using a 5W solar panel to charge a 12V battery:

And here’s what I call the “real-world wiring diagram”, which shows what it looks like in real life:

Notes about this wiring diagram:

How Long Does It Take to Charge a 12V Battery with a 5W Solar Panel?

According to our solar panel charge time calculator, it takes around 155 hours of direct sunlight for a 5W solar panel to fully charge a 50Ah 12V battery.

Here’s what I plugged in to the calculator:

And here are the estimated charge times for 5 other common solar panel sizes:

Of course, these estimated charge times vary depending on battery capacity.

What Size Solar Panel Do You Need to Charge a 12V Battery?

You can charge a 12V battery with many different solar panel sizes.

Knowing this, the question then becomes:

“How fast do I want to solar charge my 12V battery?”

Based on the above charge times, we can draw some conclusions:

5W and 10W solar panels are good for slow, trickle charging 12V batteries. They’re a good size solar panel for maintaining a 12V battery’s charge, and will slowly charge it up over the course of weeks — maybe even months depending on the weather and size of the battery.

80W and 100W solar panels are good for fast charging large 12V and car batteries. If it’s a 50Ah battery, they can fully charge it in around 12 hours or less of direct sunlight.

Like I said, you just built a solar 12V battery charger.

You connected a solar panel to a battery via a charge controller. And the solar panel is now charging that battery.

Using what you just learned, you can build even more solar chargers.

Here are some ideas for your next project:

Car batteries are also 12V batteries. So, using the same solar panel and charge controller, I was able to make a solar car battery charger.

You’re also just a few parts away from solar charging an electric bike. Don’t be fooled by how complex it looks — you just need a bigger solar panel and a small inverter.