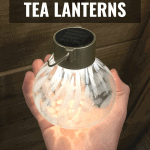 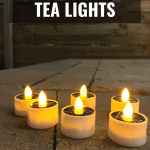 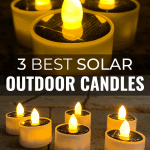 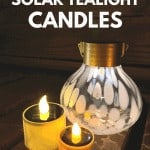 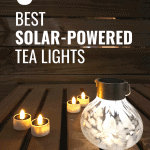 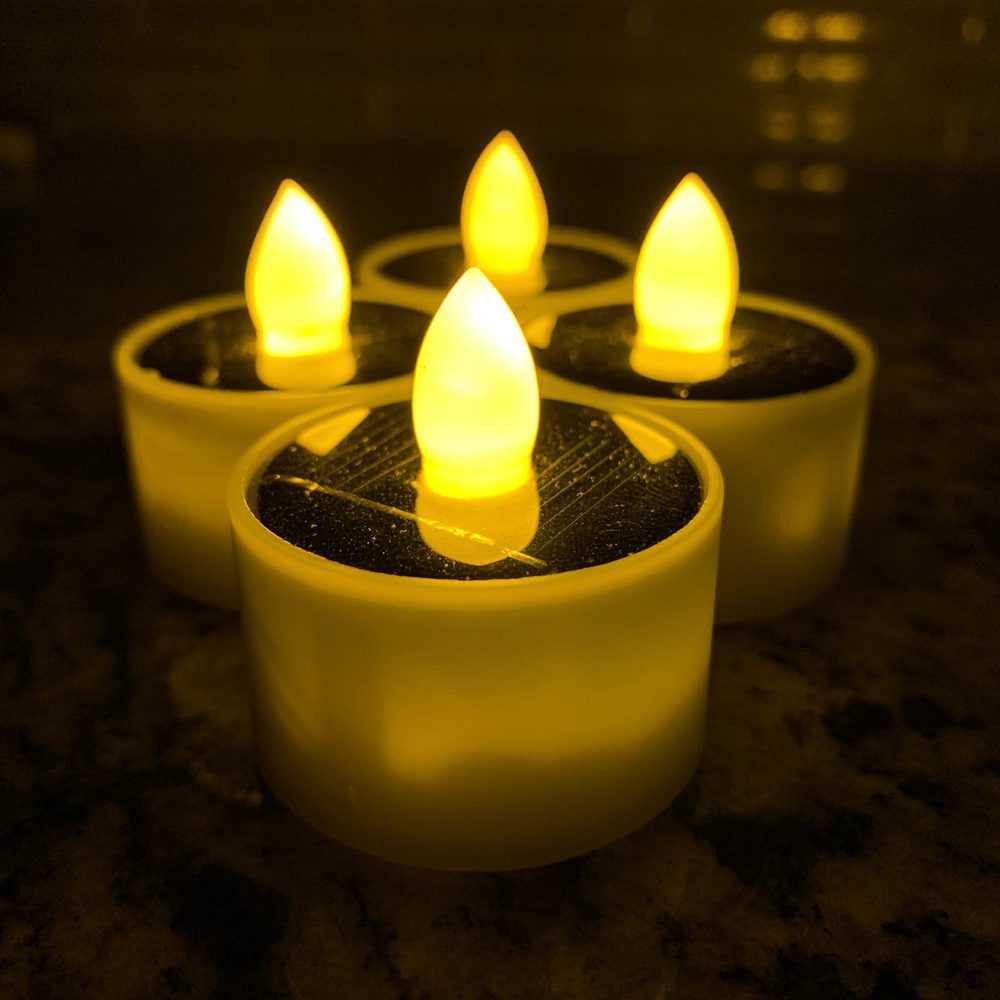 Zhongxin Solar Tea Lights
By Zhongxin
Check Price
The discrete size, pleasant light color, and respectable battery life make this the best solar-powered tea light we tested. It feels the most like a real tealight candle. 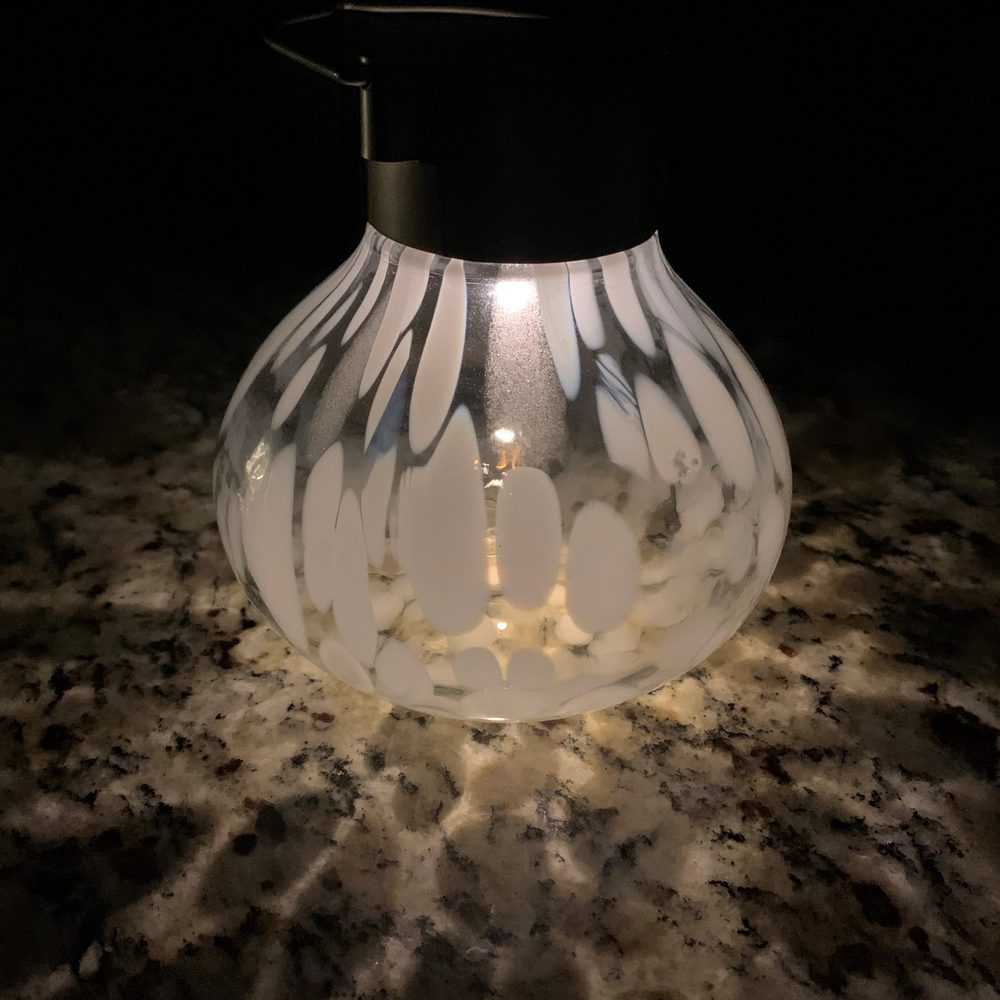 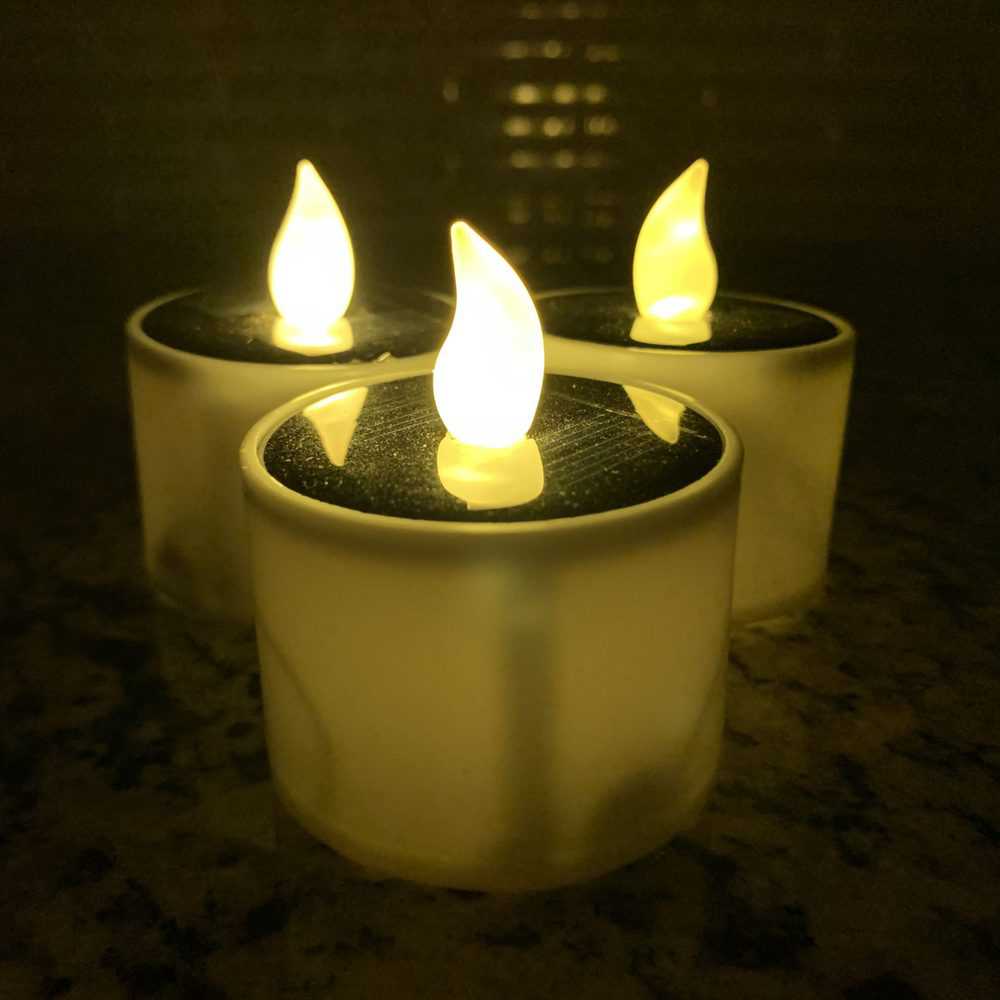 Micandle Outdoor Solar Candles
By Micandle
Check Price
The Micandle light lasted over 10 hours from a full charge, the best we tested. But it wasn’t our favorite for decorative lighting due to its size and light color.

We tested three of the best solar-powered tea lights around the house for a month. After using them daily, testing their battery life and water-resistance, and opening them up to inspect their circuits, we recommend the Zhongxin Solar Tea Lights.

Our order came with eight lights, a great value. Their small, discrete size and soft amber glow made them our favorite for mood and decorative lighting. We also found their battery life and water-resistance adequate.

None of the solar tea candles we tested are perfect. They all suffer from two minor design quirks. Familiarize yourself with them before buying.

The Zhongxin lights were our favorite because they felt the most like real tealight candles. Plus, our order came with eight lights, making them a great value.

For the price, we think these lights are the best deal. As of this writing you get eight per order.

We liked their small size and amber glow for mood and decorative lighting. They were the lights that felt the most like the real thing.

They didn’t have the best battery life, but the nearly six-and-a-half-hour runtime we got from a full charge was plenty for all the ways we tested them.

The most decorative solar tea light

Most solar tea lights sport uninspiring designs. The Allsop lantern is a welcome exception. It’s a decorative piece, but the most expensive we tested.

This solar tea “lantern” is decorative but pricey. It was our favorite design of the lights we tested, casting a a pleasant spray of dots of light.

It had the shortest battery life, coming in at a little over six hours in our test. For the premium price we would have liked a bigger battery.

We think the built-in hanger is a nice touch, as long as you don’t hang it somewhere that shades its solar panel. It’s available in three colors: blue, white, and yellow.

The Micandle lights lasted over 10 hours on a full charge, the longest by far. They were our least favorite for using as decorative lighting though, on account of their size and light color.

The Micandle is larger and slightly brighter than our top pick. The extra size comes with a bigger battery and thus better battery life. The light lasted over 10 hours on a full charge when we tested.

Its solar panel is bigger and has a higher max output, allowing the light to store more energy over the course of the day. If you’re looking for great battery life, this is our recommendation.

In addition to picking a design you love, there are just two main things we recommend considering when buying.

Batteries in small solar candles are usually rated in milliamp hours (mAh). The greater a battery’s capacity in mAh, the more energy it stores (all else being equal).

After testing these LED tea lights for a month, here’s how I personally came to think of their battery sizes:

Generally speaking, the bigger the battery the longer the light lasts. However, during testing I was happy with how long even “small” (<100 mAh) batteries lasted.

Your lights will rarely build up a full charge, so max battery life isn’t always a helpful metric. If they’re always switched on, each night they’ll come on when it gets dark and then use up all the energy they stored during the day.

Flameless tea lights are generally white or yellow. You’ll see variations on these colors such as cool white, warm white, and amber. Not as common are multi-colored tea lights.

I came to prefer the yellow and amber lights. They seemed to me to best imitate the soft glow of a real candle.

Here are some DIY alternatives to solar-powered tea lights:

I let each light charge, using a multimeter to know when its battery was full.

Then I taped over each light’s solar panel to block all incoming light, turned them on, and timed how long each light lasted before running out of battery.

Here are the results:

I took the lights apart to examine their circuits and check specs such as the energy output of the solar panel and the amperage draw of the LED. These were then compared to the manufacturer’s claimed specs, if available.

The solar panels were tested on a cloudless day in May in Atlanta, GA.

Note: Solar panel efficiency depends on a number of factors, including latitude. The efficiency of your lights’ solar panels will differ depending on where you live.

I left the lights outside during a rainstorm, then opened them up to inspect their circuits for water damage.

None of the lights were waterproof. They were all varying degrees of water-resistant.

Here are the results, from most to least water-resistant:

All the lights I tested suffer from the same two design quirks.

These quirks aren’t unique to solar tea lights. In fact, they are shared by many outdoor solar lights.

1. The switch must be ON in order for the light to charge

The light stays lit until the battery is drained or you turn the switch off. If you forget to turn it off, it’s likely that the light will run out of battery overnight.

In practice, this means your light’s battery will rarely ever charge fully. To build up a charge over multiple days you’ll have to actively turn it on during the day and off at night.

2. The light won’t light up until it’s dark enough

So for certain uses — such as placing a solar tea light on a dinner table as decorative lighting — the light won’t come on if it’s too bright in the room.

The workaround here is to block the light’s solar panel with something like tape or paper. It’s an inelegant solution.

The Zhongxin lights were our favorite because they felt the most like real tealight candles. Plus, our order came with eight lights, making them a great value.

The Zhongxin candles ultimately won me over with their combination of value and performance.

They don’t have the best battery life, nor are they the brightest, but their pleasant little size and amber glow made them feel the most like real tealight candles.

I enjoyed having them on outside on the patio and in my room for some mood lighting. Don’t expect these to be the only lights you use to light up a table or porch — they’re too dim to fly solo in nearly all scenarios — but they add a nice touch to your outdoor lighting at night.

When I tested battery life, the Zhongxin lights lasted for about six and a half hours from a full charge. And if I left them out in the sun during the day, they always stored enough energy to last long enough for how I would use them at night.

They’re decently water-resistant but not waterproof. They survived being left out in a rainstorm, but too many storms and you might start to experience the effects of water damage. But that goes for all lights in this guide.

The most decorative solar tea light

Most solar tea lights sport uninspiring designs. The Allsop lantern is a welcome exception. It’s a decorative piece, but the most expensive we tested.

The Allsop light is billed as a solar lantern rather than a tealight. It has an LED light that shines into a painted glass bulb, casting a pleasant array of light below.

It’s cute and decorative. It was my favorite design, the one that I thought looked the best as a solar patio light.

The lantern comes with a built-in hanger for hanging it outside on your porch. Just be sure not to hang it somewhere that blocks the solar panel from receiving light!

It was the most water-resistant light we tested, but, thanks to its tiny 40 mAh battery, the one with the worst battery life. Still, the 6.2 hours it lasted from a full charge was plenty.

You only get one lantern for the price, which feels like a poor deal compared with the eight lights you get from Zhongxin. The lantern doesn’t even seem brighter than the smaller lights. I’ll chalk the price premium up to the cuter design.

There are three colors available: blue, white, and yellow (I tested the white one).

The Micandle lights lasted over 10 hours on a full charge, the longest by far. They were our least favorite for using as decorative lighting though, on account of their size and light color.

The Micandle lights are bigger, brighter, and longer-lasting than our top pick. Their bigger 300 mAh battery lasted over 10 hours when fully charged.

However, the size and brightness weren’t exactly positives for me — I thought they didn’t look as good for decorative lighting and were a little too big to be discrete.

As of this writing, on the Amazon product page it says there is a water-resistant seal over the switch at the bottom. But none of the units I received had one.

As a result, when I left the lights out in a rainstorm to test their water-resistance, the inside of the Micandle got wet. The light didn’t short circuit, but I wasn’t reassured that it would hold up well for long-term outdoor use.

Still, the light works as intended and lasts the longest of the bunch. It also has the largest solar panel so it will store the most energy over the course of a day. That makes it a good pick if battery life is your top priority.

After testing three of the best solar-powered tea lights for a month, I came to prefer the Zhongxin Solar Tea Lights.

They felt the most like real tealight candles. Their discrete size and soft amber glow made them my favorite for decorative lighting.

If they’re unavailable, don’t be too concerned about going with another brand. Amazon is awash with duplicates that look almost identical and, I’d wager, function similarly. Just understand that, like a lot of solar lights, most solar candles have a couple minor design quirks.

Solar tea candles are simple products. I’ve highlighted the performance differences to draw contrast between the ones I tested, but at the end of the day they all work about the same.